Meeting dates are subject to change. Watch for agenda postings.

History of the Sheboygan Marsh

The Sheboygan Marsh covers a large portion of Russell Township. This marsh was once a large lake covering 13,000 acres, approximately the size of Lake Mendota in Madison and was approximately 45 feet deep at one time. 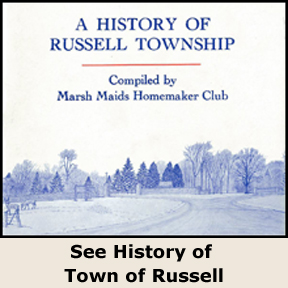 In 1870, a Sheboygan business man, John Bertschy bought the Sheboygan Marsh with the intent of draining it and turning it into farm land. Without engineers, Bertschy tried blasting the limestone ledge at the east end of the lake, but this was inefficient and their ditches or outlets were not deep enough. At that point, the land was left in a useless marshy state.

In 1916, a stock company known as Sheboygan Valley Land and Lime company financed the drainage of the marsh after determining that the soil under the surface peat was ideal for agriculture. Their vision was to create a "garden city". At the time there was a demand for more agricultural land. At least twenty miles of ditches were dug and a temporary dam was removed, allowing the water to drain, which was very successful. Unfortunately, World War I came to an end and the demand for farm land plummeted and the promoters left, defaulting on their taxes.

Peat fires eventually broke out and threatened neighboring farms, which brought about interest in re-flooding the marsh. In 1936, Sheboygan County was able to acquire the land and in 1938 a dam was constructed to allow the marsh to be re-flooded.

Russell Township was home to many Native Americans prior to settlement by the Europeans. Several large campsites and villages were located in the township, some dating back to at least 10,000 years. It is stated in the Wisconsin Archeologist that "the Sheboygan Marsh region was one of the most notable haunts of the Indian in the state" and that "the banks of this marsh are an almost continuous village site".

One of the largest sites in Russell Township is the Henschel site. A large village was located on the farm owned by Gary Henschel. Several excavations have taken place at the site by the Milwaukee Public Museum and Marquette University. In the late 1980's, excavations focused on an Early Woodland village area that was approximately 2500 years old. Large quantities of stone tools, pottery and animal remains were uncovered.

In 1996, Marquette University excavated several burials accidentally found near the Henschel farm. One of the burials was of a rare type, called a Red Ocher burial. The burial contained elaborate goods, such as shells from the Atlantic coast and copper from the Upper Peninsula of Michigan.

Another Native American site was located near the Broughton Sheboygan Marsh Park. In one of the campground sites in the park, the Sexton enclosure can still be seen today. It is oval in shape and is approximately 50 feet in diameter.

One of the last Indians to leave the area was Old Solomon. He was well known to many in the area. Old Solomon left in 1883 to go to the Menominee reservation in Keshena and died in 1889.